Just added to your cart

Check back for more items as I migrate over from www.texascrafthouse.etsy.com to the new website!

Halloween is only a couple months away. I figured now would be a great time to share with your an outfit and Elisabeth and I made a couple of years ago. We decided to try out a costume idea that we saw on Pinterest. Have you seen the super cute DIY loofah costumes? We found our example here at this blog. The instructions that were given were VERY easy to follow and our costumes turned out exactly like the picture. We were very happy and got so many compliments! We really liked that these required no sewing and no glue... just netting and elastic! 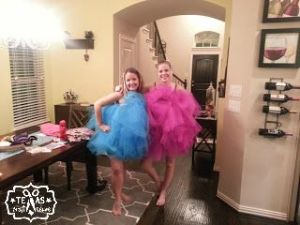 Here is a picture of our materials: 20 yards of colored netting (below is netting for two costumes - we found our netting at Joann's and used our 50% off coupon from their free app. The netting was regular $1.49 a yard), 4 yards of cord (that we cut in half so we each have a 2 yard strand), about 6 yards of elastic (you'll need enough to have a loop around your bust, hips and little pieces of elastic to tie the netting to the elastic bands), headbands (that we used to attach the cord). We had clear ornaments in the picture with the intention of making bubbles but last minute decided we didn't need them. 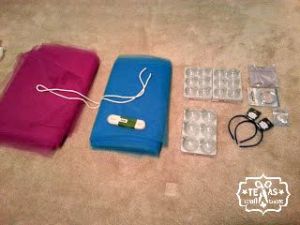 As I mentioned earlier, we followed the directions on the blog (link above). We measured out 8 equal (we just divided 20 by 8) sections and left the netting folded as we worked to make the process easier. 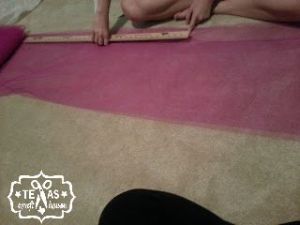 Here is Elisabeth cutting it while I am supervising. :) 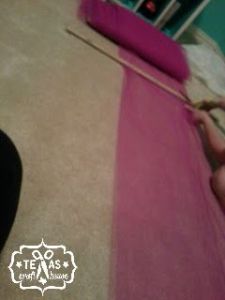 Tobias came in and was very interested in what we were doing. At one point he was jumping on and hiding underneath the netting while we were working. Notice the piles of netting we made while cutting apart the 8 sections to keep us organized. 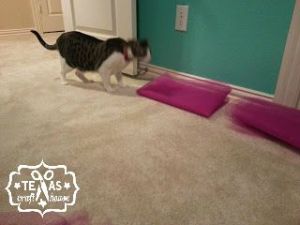 After cutting the 8 sections we measured, cut and tied the elastic around our waist and bust. You want it somewhat snug so the jumbo piles of netting stay in place all night. 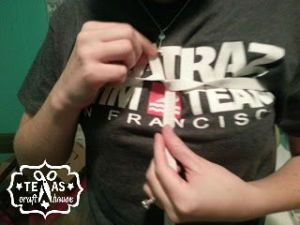 After measuring and cutting the elastic we labeled the tied ends with a T or a B for "top" or "bottom" so we knew which loop was for what part of the costume. 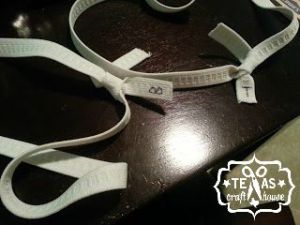 Then we took the sections of netting one at a time and unfolded it. First, we fold it in half (hotdog style) once. Then, we folded it in thirds (hamburger style). Last, we took one of the small elastic pieces we had cut and tied it around the middle of the folded netting. 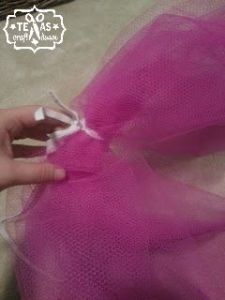 After we had it folded and tied we tied the small elastic knot to the elastic of the 'top' or 'bottom' elastic loops. When you are doing this space them out evenly so you do not have any major gaps in your costume. 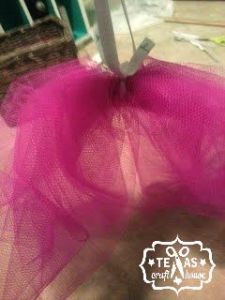 Here is a picture of Elisabeth trying it on to see if we had the netting evenly spaced on the elastic loops. It is looking good! We placed the cording on the top just to see what it would look like. 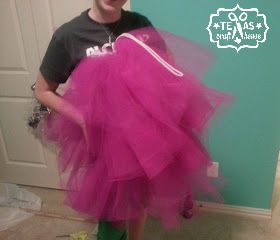 When you have it the way you like it take some time to wrinkle and scrunch up the netting as much as possible. The more wrinkled and crazy the better! Here is a picture of us when we were finished making them and with our cord headbands on. We just tied the cord directly on the headband.

Here is a picture of us playing around in her shower with a small loofah. We were so proud of these costumes! 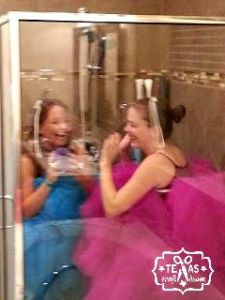 Both costumes took us about an hour to make. It was easy.... no gluing, no sewing... just fold and tie! You could get some glittered netting or use a variety of colors to make a tie dye one. These were very comfortable to wear and a lot of fun. Visit the razmatag blog for more detailed instructions and lots of other cute crafts and designs. :) What are you going to be for Halloween?